My latest book received a National Geographic Traveler Award in “book of the year” category. At the same time it was nominated for “non-fiction book of the year”  award by the biggest readers’ website in Poland – LubimyCzytać.pl.

As it was said: “A Creaking Sound” is a touching portrait of the contemporary world told in seven different stories about ordinary people whose fates predestine them to become heroes. Seven journeys in time. And since time is given to us in the form of memory, it is seven journeys through the seven memories of seven ordinary people. On the surface it’s the same world and the same periods of time, but they’re seen from the different perspectives of an inhabitant of Uganda, the USA, Colombia, India, Finland, Zimbabwe and Japan.

It is an unusual combination of personal stories and an insight look at the global problems of the contemporary world. In a very vivid and convincing manner the author shows the world as the characters see it, forcing readers to reflect on the human condition. 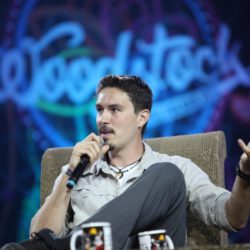